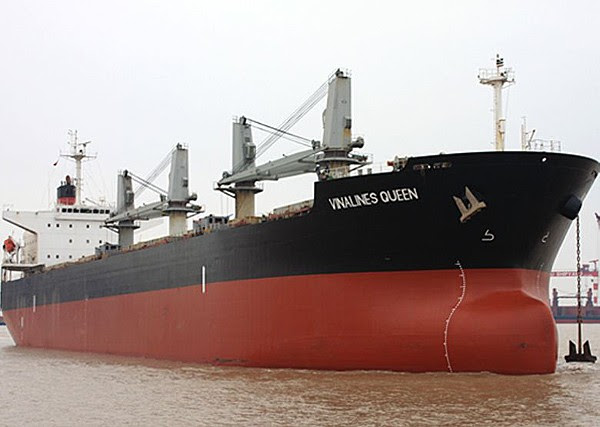 Another Hazardous Cargo, Another Ship Sinking


On Christmas day, the bulk carrier VINALINES QUEEN, carrying a cargo of nickel ore from Morowali, Indonesia to China, went missing.  The ship and its crew of 22 must now be considered lost.  Although it is certainly too soon to ascribe a known cause of sinking, it is probably fair to say, as an American judge did many years ago: “Sometimes circumstantial evidence can be very convincing, just as when you find a trout floating in the milk”.
There continues to be a crying need for greater information, understanding and enforcement of regulations – as well as testing – of cargoes that may liquefy.  Nickel ore is one such.  Intercargo, the International Association of Dry Cargo Shipowners, has commendably been a leader in fighting for international action to protect the lives of seafarers, at risk when bulk cargo vessels, like the Supramax VINALINES QUEEN, suddenly disappear.
Over the years, many such losses involved vessels carrying direct reduced iron (DRI), a cargo prone to heating when wet, sometimes resulting in a disastrous explosion.  It took many years for international authorities to recognize the culpability of unscrupulous shippers and consignees – one of our industry’s little secrets.
It will be recalled that in December of 2010, three bulk carriers and their crews were lost, all as a result of cargo liquefaction.  The danger hasn’t gone away.
There is a need for stronger and clearer requirements particularly with respect to accurate information on the carriage of bulk cargoes.  The IMO has held meetings, most recently last September, of its Sub-Committee on Dangerous Goods, Solid Cargoes and Containers (DSC), with many participants, including Intercargo, The International Group of P&I Clubs, The International Union of Marine Insurers, as well as other industry associations, to take further action strengthening the requirements of the existing IMSBC Code.  A prepared schedule for nickel ore will be further reviewed this coming March, before – hopefully – its inclusion in the IMSBC Code at the forthcoming Dangerous Goods Sub-Committee in September.
The safety terminology of hazardous cargoes uses the term “Competent Authority”.  Usually, such an Authority is either a shipper at the port of loading, or receiver at the point of destination.  Rob Lomas, the Secretary General of Intercargo has called for  “…the reassurances of the Competent Authorities in…exporting countries that their procedures and processes have integrity and transparency so that this message is received and most importantly, trusted by the shipowners.  Competent Authorities are key to ensuring that seafarers’ lives are not put in danger”.
It is also clear that bulker losses like that of the VINALINES QUEEN are taking place within specific trades, and with similar destinations in the Far East.  It would be very helpful if the International Maritime Organization (IMO) could study these specific trades, with the objective of getting the word out on hazardous bulk cargoes.  Many of the ships that have been lost have crews and flag states that are not likely to have gotten the necessary information on the risks involved, and the measures that need to be taken, in handling dangerous or difficult cargoes.  The VINALINES QUEEN was built in 2005, and from all available information was in satisfactory condition.  Its loss is another tragedy that didn’t need to happen.
Fuente: Marinelink
Publicado por Unknown en 09:11